Below are some special events related to the eScience Conference that you may be interested in.

Please join us for the

Please join us for dinner at

The Revolution in Experimental and Observational Science: The Convergence of Data-Intensive and Compute-Intensive Infrastructure

Abstract: The revolution in Experimental and Observational Science (EOS) is being driven by the new generation of facilities and instruments, and by dramatic advances in detector technology. In addition, the experiments now being performed at large-scale facilities, such as the Diamond Light Source in the UK and Argonne Advanced Photon Source in the US, are becoming increasingly complex, often requiring advanced computational modelling to interpret the results. There is also an increasing requirement for the facilities to provide near real-time feedback on the progress of an experiment as the data is being collected. A final complexity comes from the need to understand multi-modal data which combines data from several different experiments on the same instrument or data from several different instruments. All of these trends are requiring a closer coupling between data and compute resources. 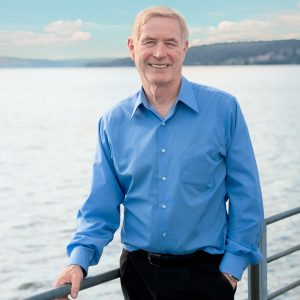 Brief Biography: Professor Tony Hey is currently with the Science and Technologies Facilities Council, UK. He started his career in Particle Physics, working at a myriad of institutions, including the University of Oxford, CalTech, CERN, MIT, and the University of Southampton, where he was a professor and academic for thirty years. He migrated into the field of Computer Science, becoming interested in applying parallel computing techniques to large-scale scientific simulations. He was a visiting fellow at IBM and Los Alamos National Laboratory. Professor Hey left academia to lead the UK’s e-Science Programme from 2001 to June 2005, then joined Microsoft, where he remained until 2014. Tony Hey has authored or co-authored a number of books including The Fourth Paradigm: Data-Intensive Scientific Discovery, The Quantum Universe and The New Quantum Universe, The Feynman Lectures on Computation and Einstein’s Mirror.

Abstract: Today’s scientific processes heavily depend on fast and accurate data analysis. Scientists are routinely overwhelmed by the effort needed to manage the volumes of data produced either by observing phenomena or by sophisticated simulations. As data management software is often inefficient, hard to manage, or too generic to serve scientific applications, the scientific community typically uses special-purpose legacy software. With the exponential growth of dataset size and complexity, however, application-specific systems no longer scale to efficiently analyse the relevant parts of their data, thereby slowing down the cycle of analysing, understanding, and preparing new experiments. I will illustrate the different nature of problems we faced when managing brain simulation and patient data for neuroscience applications, and will show how the problems from neuroscience translate into challenges for the data management community. These challenges inspire new technologies which overturn long-stangding assumptions, enable meaningful, timely results and advance scientific discovery. Finally I will describe the challenges associated with gaining access to medical neuroscience data and using it toward advancing our understanding of the functionality of the brain.

Brief Biography: Anastasia Ailamaki is a Professor of Computer and Communication Sciences at the Ecole Polytechnique Federale de Lausanne (EPFL) in Switzerland. Her research interests are in data-intensive systems and applications, and in particular (a) in strengthening the interaction between the database software and emerging hardware and I/O devices, and (b) in automating data management to support computationally- demanding, data-intensive scientific applications. She has received an ERC Consolidator Award (2013), a Finmeccanica endowed chair from the Computer Science Department at Carnegie Mellon (2007), a European Young Investigator Award from the European Science Foundation (2007), an Alfred P. Sloan Research Fellowship (2005), eight best-paper awards in database, storage, and computer architecture conferences (2001-2012), and an NSF CAREER award (2002). She holds a Ph.D. in Computer Science from the University of Wisconsin-Madison in 2000. She is an ACM fellow and the vice chair of the ACM SIGMOD community, as well as a senior member of the IEEE. She has served as a CRA-W mentor and is a member of the Expert Network of the World Economic Forum.

The use of genomics to understand human disease

Abstract: Following the completion of the human genome project (2003) and the first report of an individual’s human genome (2007), hundreds of thousands of human genomes have now been sequenced. Comparisons of human genomes to each other have led to a deeper understanding of the genomic landscape, including single nucleotide variants and structural variants. Genome analysis has also led to the discovery of the genetic basis of a variety of diseases. This presentation provides an overview of genomic approaches to disease, and then discusses two examples. We identified a somatic mosaic variant that causes a rare neurocutaneous disease, Sturge-Weber syndrome, as well as commonly occurring birthmarks. In studies of autism spectrum disorder we found that mosaic mutations account for 5% of diagnoses. The presentation highlights both computational aspects of genomics and the biological significance of this approach.

Brief Biography: Jonathan Pevsner is a Professor in the Department of Psychiatry and Behavioral Sciences, Johns Hopkins School of Medicine, and also holds a secondary appointment in the Department of Neuroscience, holds a joint appointment in the Division of Health Sciences Informatics (Johns Hopkins School of Medicine) and the Department of Molecular Microbiology and Immunology, Johns Hopkins Bloomberg School of Public Health, and is an affiliate of the McKusick-Nathans Institute of Genetic Medicine. The Pevsner Laboratory studies the genetic basis of childhood neurological diseases, including Sturge-Weber syndrome, autism spectrum disorders and chromosomal disorders. The lab applied whole genome sequencing and targeted next-generation sequencing to identify mutations in a gene that cause the neurocutaneous disorder Sturge-Weber syndrome as well as commonly occurring port-wine stain birthmarks (Shirley et al., New England Journal of Medicine, 2013). The Pevsner Lab has characterized chromosomal abnormalities in a variety of syndromes and have developed software for the analysis of gene expression data, single nucleotide polymorphism (SNP) data, and next-generation sequence data. Jonathan Pevsner was recently named the Chief Scientific Officer of the Sturge-Weber Foundation (SWF).

We would like to thank our supporters and sponsors for making this conference possible: